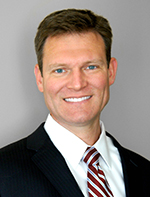 Dr. Darren Keiser grew up in Nebraska, graduating from Millard North High School in Omaha.  He is the oldest of nine children.  He is an Eagle Scout.  Dr. Keiser is fluent in Spanish, since returning from a volunteer two-year mission in Guatemala.

Darren Keiser has been in practice at the Methodist Physicians Clinic Orthopedic and Sports Medicine Center since 2003. He is Board-Certified in orthopedic surgery.  He was given “The Outstanding Young Nebraskan” award by the Nebraska Jaycees in 2008. He served on the Methodist Physicians Clinic Executive Committee for approximately 6 years until 2012. He is a Fellow of the American Academy of Orthopedic Surgeons.

Darren recently returned from a visitation in Nice, France with Dr. Pascal Boileau, a world-renowned shoulder specialist. He is an active volunteer in church, charitable organizations, and community. He loves spending time with his wife and six children. He enjoys travel, the outdoors, music, and athletics.

Darren Keiser – What is an Orthopedic Surgeon?

Darren Keiser is an Orthopedic Surgeon that treats problems of the musculoskeletal system. While orthopedic surgeons are familiar with all aspects of the musculoskeletal system, many orthopaedists specialize in certain areas, such as the foot and ankle, spine, shoulder, hand, hip or knee. Whether your goal is back to sports, back to work, or back to an active lifestyle free of pain, Darren Keiser invites you to contact his office to set up an appointment. His mission is to help you achieve a successful and happy outcome.

They may also choose to focus on specific fields like pediatrics, trauma or sports medicine. Some orthopaedic surgeons may specialize in several areas. This involves: