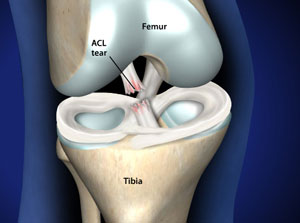 The ACL is an elastic band of tissue in the knee that helps hold the joint together. An ACL tear is a common injury that can occur when the knee is twisted or hyperextended.  Often the injury occurs as a non-contact pivoting injury.  An audible “pop” is commonly appreciated, and the knee immediately begins to swell.

For reasons that are not fully understood, ACL tears are much more common in women than in men.  When compared to males, the bony area that contains the ACL is more restrictive. Female ACL’s are smaller than male’s.  Women also have slightly increased knee joint laxity, and land differently from a jump because of their unique bony alignment.

ACL tears can occur in association with other injuries such as meniscal and ligament tears. Isolated ACL tears result in knee instability. This means the patient feels the knee give way. A feeling of mistrust usually occurs with twisting, pivoting, or changing direction. The lower leg becomes unstable in its relation to the upper leg.

Female athletes who participate in jumping and pivoting sports are 2 to 10 times more likely to sustain a knee ligament injury, such as an anterior cruciate ligament (ACL) injury, than male athletes participating in the same sports. The substantial increase in the number of women and girls participating in athletics, coupled with the 2- to 10-fold higher injury rate, widened the gender gap in the number of serious knee ligament injuries.

Most ACL injuries—whether in male or female athletes—occur by noncontact mechanisms, often during landing from a jump or making a lateral pivot while running. Osteoarthritis of the knee will develop in 50 percent to 100 percent of injured female athletes within one to two decades after knee injury.

When a patient with an ACL injury is initially seen for evaluation in the clinic, the knee doctor may order X-rays to look for any possible fractures. He or she may also order a magnetic resonance imaging (MRI) scan to evaluate the ACL and to check for evidence of injury to other knee ligaments, meniscus cartilage, or articular cartilage.

In addition to performing special tests for identifying meniscus tears and injury to other ligaments of the knee, the physician will often perform the Lachman’s test to see if the ACL is intact.