This overuse injury is an inflammation that occurs at the point where the patellar tendon attaches to the tibia. It most commonly affects adolescents. One or both knees may be affected.  The growth plate is an area of growing bone that is made of cartilage, and so it is an area of weakness in youth.

Osgood-Schlatter condition (formerly known as Osgood-Schlatter’s disease) is a painful condition characterized by tiny, microfractures of the bony bump in the lower leg bone (tibia) where the ligament from the kneecap (patella) is inserted into the tibia. The bump is known as the tibial tubercle. It is a disorder of the early teens, especially during a growth spurt, more likely to affect young men than young women, especially athletes of either sex who are active in games requiring substantial running and/or jumping.

It is a common, transient, short-term disorder, also called an overuse condition, that usually requires only rest and restraint from further strenuous activity for a relatively short period of time before it heals itself. The tendon below the kneecap (patellar tendon) attaches to the shinbone (tibia) at the tibial tubercle. In Osgood-Schlatter disease, the enlarged, inflamed tibial tubercle is nearly always tender when pressure is applied.

Osgood-Schlatter disease will almost always goes away on its own once the child stops growing.

Treatment includes:
> Rest and decreasing activity when your child has symptoms
> Putting ice over the painful area two to four times a day, and after activities
> Ibuprofen or other nonsteroidal anti-inflammatory drugs (NSAIDs), or acetaminophen (Tylenol).

In many cases, the condition will get better using these methods.

Adolescents should be allowed to play sports if the activity does not cause too much discomfort. However, symptoms will improve faster if activity is kept to a minimum. Sometimes, a child will need to take a break from most or all sports for 2 or more months.

In the rare case where symptoms do not go away, a cast or brace may be used to support the leg until it heals. This typically takes 6 – 8 weeks. Crutches may be used for walking to keep weight off the painful leg. Rarely, surgery may be needed. 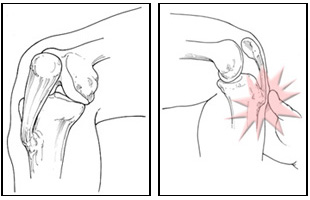