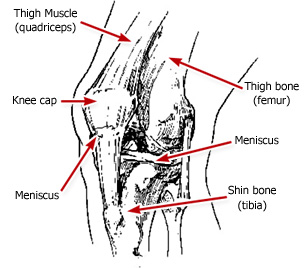 The knee is the largest joint in the body, and one of the most easily injured. It is made up of the lower end of the thighbone (femur), which rotates on the upper end of the shinbone (tibia), and the knee cap (patella), which slides in a groove on the end of the femur. The knee also contains large ligaments, which help control motion by connecting bones and by bracing the joint against abnormal types of motion. Another important structure, the meniscus, is a wedge of soft cartilage between the femur and tibia that serves to cushion the knee and helps it absorb shock during motion.

In 2003, patients made approximately 19.4 million visits to physicians’ offices because of knee problems. It was the most common reason for visiting an orthopedic surgeon.

The knee is a complex joint with many components, making it vulnerable to a variety of injuries. Many knee injuries can be successfully treated without surgery, while others require surgery to correct. Here are some facts about the knee from the American Academy of Orthopedic Surgeons.

ACL injury
Changing direction rapidly, slowing down when running, and landing from a jump may cause tears in the ACL. Athletes who participate in skiing and basketball, and athletes who wear cleats, such as football players, are susceptible to ACL injuries.

MCL injury
Injuries to the MCL are usually caused by a direct blow to the outside of the knee. These types of injuries often occur in contact sports, such as football or soccer.

PCL injury
The PCL is often injured when an athlete receives a blow to the front of the knee or makes a simple misstep on the playing field.

Torn cartilage
When people talk about torn knee cartilage, they are usually referring to a torn meniscus. The mensicus is a tough, rubbery cartilage that is attached to the knee’s ligaments. The meniscus acts like a shock absorber. In athletic activities, tears in the meniscus can occur when twisting, cutting, pivoting, decelerating, or being tackled. Direct contact is often involved.

Orthopedic surgeons use a variety of methods to treat knee injuries in athletes. A common method used to treat mild knee injuries is R.I.C.E., which stands for “rest, ice, compression, and elevation.” Rest the knee by staying off it or walking only with crutches. Apply ice to control swelling. Use a compressive elastic bandage applied snugly, but loosely enough so that it does not cause pain. Finally, keep the knee elevated.